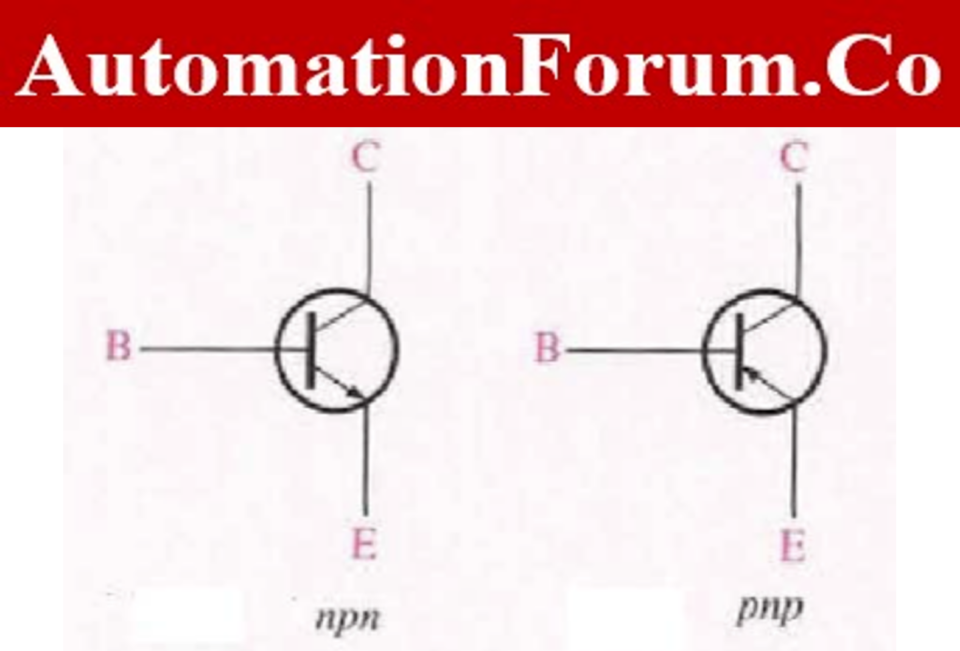 Transistor is also called as BJT – Bipolar Junction Transistor. The transistor symbol for NPN and PNP is shown below.

Transistor has three terminals Base, Emitter & collector. Construction of transistor for both NPN & PNP is shown below in figure (a). Figure (b) represents the two-diode analogy of the transistor. As it shown the transistor consists of 2 junctions namely Emitter–Base (EB) junction & Base Collector (BC) junction. Figure (c) shows the NPN & PNP terminal voltage & current.

The transistor has two major tasks:

There are four modes of operation in transistor. They are as follows:

The different modes can be obtained by providing proper biasing to the input and output junctions. Considering the common emitter configuration, the circuit diagram is as follows:

Emitters in the common emitter configuration serve as a common terminal for both input and output.

Base acts as an input terminal.

Collector acts as an output terminal.

Then emitter current is represented as, IE = IB +IC

From the above expression, it is clear that transistors work as an open switch, which means the switch is in the off state. This is a shaded region near the X axis (VCE).

Both the emitter base junction and the collector base junction are forward biased in this mode. Base emitter voltage >0.7 V (base emitter diode is Forward biased) which means input junction is forward biased. Now the transistor will be biased to have the highest base current applied, therefore the collector current is high for the low collector emitter voltage drop. It is shown in the characteristics response as a shaded region near the Y axis (IC). Here with the smallest depletion layer, the highest current flows through the transistor. As a result, the transistor is turned “Fully-ON.”

When switch is fully on VCE = 0 therefore IC=VCC/RL

In active mode, the input base emitter junction is forward biased and the output collector emitter junction is reverse biased. When selecting the proper operating point (Q) the transistor can be used as an amplifier. The BE junction is forward biased, so it acts as diode &therefore IB currents increase. Biasing the output junction, the collector current IC increases proportionally to the base current. The effect of output voltage VCE on the IC is negligible for the active region. Therefore IC≅IB. In characteristic response, the center portion indicates the active region.

Explain transistor as an amplifier

The transistor works as an amplifier when it operates in active mode with proper biasing.

List some application of transistor when working as an amplifier:

How Common Emitter amplifier differs from Common Base Amplifier?

The emitter and collector regions interchange positions in this mode. The gain in inverted mode is much smaller because most BJTs are made to optimize current gain in forward-active mode. This mode is rarely employed. This transistor mode is taken into account for fail-safe situations and some kinds of bipolar logic. In this region, the reverse bias breakdown voltage to the base might be orders of magnitude lower. Therefore, IC is proportional to IB but the flow of current is in reverse.

Different Modes of operation of transistor

The above quadrant shows different mode of operation with respect to the applied voltage.

What is the value of IC when transistor is said to be in cut-off region?

How do you know if a Transistor is saturated or active?

What is the difference between a cut-off region and a saturation region?

What is Instrumentation & Control?