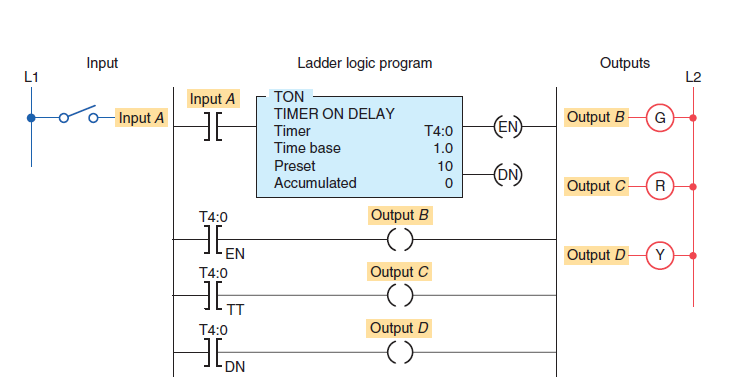 There are mainly two types of timers: On delay timer, Off-delay timer

An “on-delay” timer activates an output only when the input has been active for a minimum amount of time. For example, To start the conveyor belt motor, the operator must press and hold the “Start” pushbutton for 10 seconds, during which time the siren sounds, warning people to clear away from the conveyor belt that is about to start. Only after this 10-second start delay does the motor actually start (and latch “on”):

This timer instruction differs from the on-delay type in that the timing function begins as soon as the instruction is deactivated, not when it is activated. An application for an off-delay timer is a cooling fan motor control for a large industrial engine. In this system, the PLC starts an electric cooling fan as soon as the engine is detected as rotating, and keeps that fan running for two minutes following the engine’s shut-down to dissipate residual heat.

What are the components of a PLC?