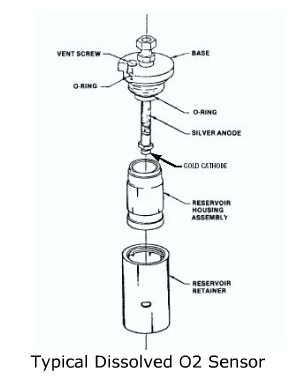 One of the most important measurements in the determination of the health of a body of water is its dissolved oxygen content. The quantity of dissolved oxygen in water is normally expressed in parts per million (ppm) by weight and is due to the solubility of oxygen from the atmosphere around us.

The atmosphere consists primarily of nitrogen and oxygen and since both of these gases are soluble in water, they are present in varying amounts in all natural or man-made bodies of water. These amounts are proportional to the solubility and partial pressure of the two gases
Theory
The amount of oxygen that a given volume of water can hold is a function of:
1. The pressure the atmospheric oxygen is exerting at the air- water interface.
2. The temperature of the water.
3. The amount of other substances dissolved in the water.
Effect of Partial Pressure of Oxygen on Dissolved Oxygen
A volume of water in contact with air will absorb air and hence oxygen until the pressure the absorbed oxygen exerts at the air-water interface equals the pressure exerted at the same interface by the oxygen in the air. At this point, the water is said to be saturated with oxygen. The amount of oxygen actually absorbed is quite small being of the order of about five or ten parts of oxygen to one million parts of water.
Effect of Temperature on Dissolved Oxygen
As everyone who has ever watched a pot boil knows, bubbles form on the side and bottom of the pot. The number and size of the bubbles increase with temperature. These are bubbles of air that have been dissolved in the water. Figure 1-A represents a beaker of oxygen saturated water at room temperature. The partial pressures of oxygen above and below the water surface are equal. Figure 1-B shows what happens when we begin to heat the system. In essence, we are putting energy into the system. The oxygen molecules which have a low solubility become readily energized by the infusion of energy into the system. The more sluggish water molecules step up their molecular activity at a slower pace. As a result, more oxygen molecules break through the air-water interface to the space above the water surface than water molecules do, leaving fewer oxygen molecules dissolved in the water. When the water boils as is shown in Figure 1-C, all of the oxygen molecules have been driven out of the water and now the water molecules are coming out of the beaker so fast that they form a layer of water vapor immediately above the water surface. This layer effectively isolates the water from atmospheric oxygen and the DO content of the water is zero.
Methods of Determination:

Over the years a number of methods for dissolved oxygen determination have been developed. These methods have been found to vary widely in their sensitivity, susceptibility to electrode poisoning by the presence of undesirable compounds, and, in some instances, sensitivity to a slow flowing or static aqueous media. Some methods require a very clean sample devoid of extraneous chemical compounds, but only a few are adaptable to continuous on-line measurement. The various methods can be divided into three principle categories:
1. Laboratory methods (Winkler Method).The Winkler Method (Iodometric Method)
The Winkler Method is a more accurate way to determine DO levels, and is used to calibrate DO probes.
2. Electrochemical analysis (conductimetric, voltametric, and galvanic).
3.Membrane electrode methods (galvanic membrane electrodes and amperometric membrane electrodes).
previous post

What is Flow Injection Analysis (FIA)?